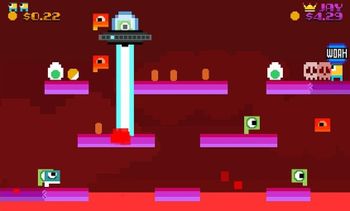 Dave is a man with big dreams.
"JUMP AND THROW AND DON'T DIE! WOAH DAVE!"
Advertisement:

Woah Dave! (sic) is a one-screen platformer in the vein of Mario Bros., created by Choice Provisions of BIT.TRIP fame. The protagonist, Dave Lonuts, is tasked with fighting an endless army of aliens that drop out of the sky in eggs. Dave must do so by picking up and throwing skull bombs, the coveted Woah Block, or even other eggs at hatched aliens. If an alien crawls into the lava at the bottom of the screen, it will "evolve" into a more dangerous enemy that yields more pennies.

Outside of this game, Dave also appears as a Guest Fighter in another Choice Provisions game, Runner3, as well as in Mutant Mudds Super Challenge.