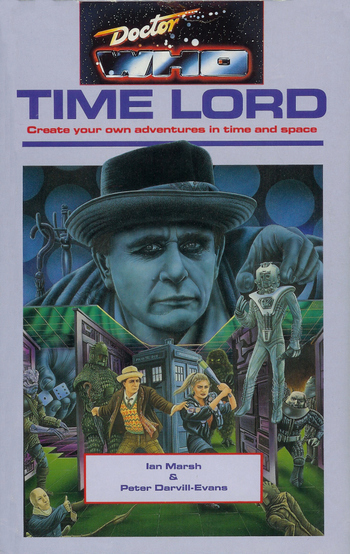 Time Lord is a Tabletop RPG based on the television series Doctor Who. It was created by Ian Marsh and Peter Darvill-Evans, both alumni of Games Workshop, and published in 1991 by Virgin Publishing, where Darvill-Evans was overseeing the Doctor Who New Adventures.

A revised edition was released free on the internet in 1996, with a new sample adventure and several new appendices discussing the game's design philosophy and offering advice on character creation (something lacking from the original edition, which emphasised using existing characters from the TV series).

No official supplements were ever released, but fan-made supplements and adventures exist. Nathaniel Torson's Journies (sic) supplement includes additional tools for character generation, rules covering regenerating Time Lord characters, and a system of Dramatic Effects allowing characters to bend the rules in the service of Drama (for example, a character who is too far away from a bomb that's about to explode and kill everyone may spend a Drama Point in order to reach the bomb in the Nick of Time).

The core rulebook provides examples of: