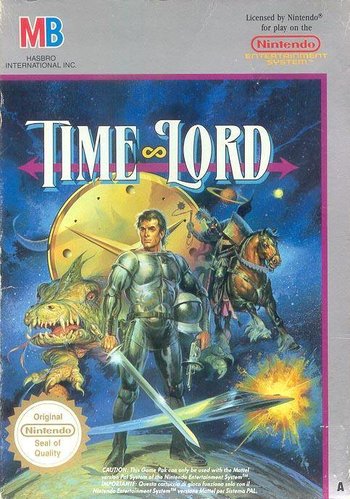 Time Lord is a Side-Scrolling Platform Game released for Nintendo Entertainment System in 1990. It is one of the earliest games to be released for the Nintendo by Rare.

In the year 2999, Earth is under siege by aliens from the planet Drakkon. The player controls the titular Time Lord, humanity's last hope against the Drakkon Lord, who must use a Time Machine to travel back in time to four different eras, where adapted Drakkon warriors are wreaking havoc in an effort to change the course of human development and render them more easily conquered in the present day. Using humanity's only remaining time machine, the Time Lord must travel to Medieval England 1250 AD, Western U.S.A. 1860 AD, the Caribbean 1650 AD, and France 1943 AD and defeat the Drakkons. However, he can only advance to each new zone by capturing power sources from the Drakkon forces, and if he fails to return to Earth by January 1, 3000... it's all over.

No relation to a certain other Time Lord.