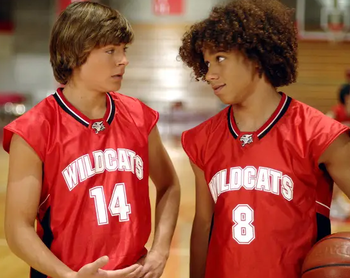 ♫"Wildcats everywhere
Wave your hands up in the air!"♫

A tropably generic name and mascot for a sports team.

This trope tends to run in two flavors. When the team and its struggles are central to the plot, they are likely to be the Wildcats because it's a safely neutral name (i.e. not under the claim and copyright of someone who could sue the work to kingdom come). The implication is that the writers needed a placeholder name, and the Wildcats will do. When the team is not the focus of the plot, calling them the Wildcats make them sound like the local sports team of Everytown, America; a placeholder team rather than merely a placeholder name. This flavor often comes up in sitcoms and cartoons, especially when the plot centers on a character trying to make "the team" or go to "the game."

Definitely Truth in Television. Nor is this trope confined to high school: the sports teams of the University of Arizona, Bethune-Cookman University, Davidson College, Kansas State, University of Kentucky, University of New Hampshire, Northwestern University, Villanova, and Weber State (not an exhaustive list) are all Real Life Wildcats.

One use for this trope is to make a gentle dig at the NCAA's naming policies. While the name Wildcats is historically popular, the number of teams vaguely named after cats and birds has exploded recently as schools try to get away from older, politically incorrect nicknames (e.g. "We're the Sabrecats. We used to be the Savages, but we had to change that"). See Political Correctness Gone Mad.

Not to be confused with the superhero comic series Wildcats.

Bob learns his soccer team, the Gold Dragons, is going against the Blue Dragons.

Bob learns his soccer team, the Gold Dragons, is going against the Blue Dragons.