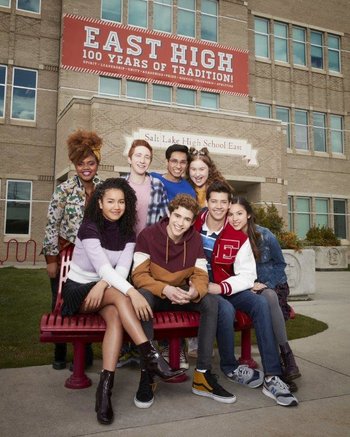 They're (almost) all in this together.
"I've seen the original movie thirty-seven times. And the first 15 minutes of both sequels."
— Carlos
Advertisement:

Okay. Everybody knows High School Musical; it was the film series that set a template nearly all Disney Channel Original Movies since have attempted to emulate. It was a huge success for the network, and launched many careers. BUT, what if we have a show set at the school where the films were set, about the kids of that school staging their own version of High School Musical? Hence, High School Musical: The Musical: The Series. Yes, we know, it's a mouthful.

In a somewhat-meta move, Miss Jenn (Kate Reinders), a former background dancer of the original film, joins East High School to direct the stage the adaptation of it. Perpetual ensemble-member Nini (Olivia Rodrigo) auditions for lead alongside her new boyfriend, senior theatre jock E.J. (Matt Cornett), but soon butts heads with new girl Gina (Sofia Wylie). Further complicating things is her ex-boyfriend Ricky (Joshua Bassett), who's never liked theatre but auditions in the hopes he can win her back. When Ricky and Nini are cast as Troy and Gabriela, everyone in the drama department gets ready for...well, drama.

Unlike the original High School Musical, which was set in Albuquerque, New Mexico, this show acknowledges that the real East High is located in Salt Lake City, Utah, and is shot on location there. The series debuted in 2019 as one of the launch titles for Disney+. It was renewed for a second season before the first premiered - though rather than staging the second High School Musical movie, the students performed the Beauty and the Beast musical. It was initially slated for 2020, but due to COVID-19 production was delayed and it didn't come out until 2021. On September 13 of that year it was renewed for a third season, which will follow the cast to summer camp and include performances based on the Frozen stage musical.