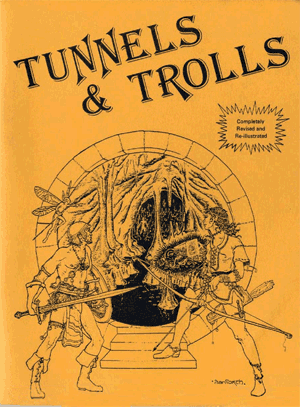 "This book is dedicated to Dave Arneson and Gary Gygax, who first opened Pandora's box, and to Ken St. Andre, who found it could be opened again."
—Runequest, 2nd edition rulebook
Advertisement:

In April 1975, Ken St. Andre borrowed a 1st edition Dungeons & Dragons set from a friend. He found that he liked the concept but disliked the miniature wargame style of play, the use of polyhedral dice, alignments and clerics. He decided to write his own rules set and play the game with that instead. After two months of playing the game with his friends and rewriting it based on experience, he printed the forty-page 1st edition rules book in a first run of one hundred copiesnote until that point, the rules had been referred to as "Dungeons & Dragons", and since TSR hadn't trademarked the name at that time some playtesters argued for simply taking over the name; in the end the community decided against it: KSA's favored name was voted down and the rules were published as Tunnels & Trolls.

Up to the beginning of the 1980s, T & T enjoyed moderate success, reaching its classic 5th edition in 1979. Then competition from a large number of new games, as well as significant rewrites of older games like D & D, pushed it into obscurity. According to The Other Wiki, in 1999 Pyramid magazine named Tunnels & Trolls as one of The Millennium's Most Underrated Games. It still has its loyal followers in many countries, though, with Japan still publishing an official magazine for it (for example). In 2005 a 30th Anniversary Edition (aka 7th edition) was published with modernized rules.

Tunnels & Trolls uses only six-sided dice for game mechanics, and the principle of simplicity and uniformity permeates the rules. Compared to the infamously convoluted and cryptic 1st ed Dungeons & Dragons rules, the Tunnels & Trolls rules were clearly laid out and well-explained. T & T was also less serious-minded than D & D: the tone was lighter, gameplay was oriented towards having fun, the spell names are mostly cute or punny, or both. However, the game is not joke-oriented as a whole — it is a sound RPG.

Some of the significant innovations of T & T were:

In January 2013, it was being funded for a Deluxe Edition