Tabletop Game / Trogdor!! The Board Game 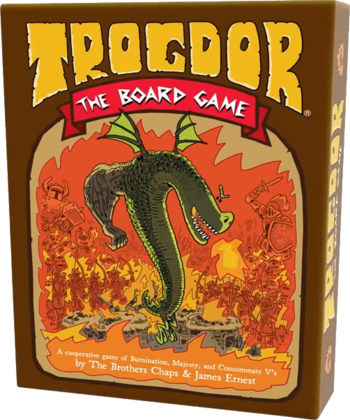 A cooperative game of burnination, majesty, and consummate V's
Advertisement:

Trogdor!! The Board Game is a co-operative board game for up to six players, based on Trogdor the Burninator and the world of Peasant's Quest, as seen in the Homestar Runner web cartoons and other spin-offs. The game was posted on Kickstarter in July 2018, and the campaign was overwhelmingly successful, having earned over $1.4 million (out of an original goal of $75,000) when it ended a month later. James Ernest of Cheapass Games helped with game design and play-testing.

Players take on the roles of the Keepers of Trogdor, who guide the infamous wing-a-ling dragon as he rampages through the land of Peasantry. The playfield takes the form of 25 land tiles, arranged in a 5x5 square, and players command Trogdor to move, burninate things, devour peasants, and more.

Each of the Keepers has a special power they can use on their turn and a powerful magic artifact that can be recharged and reused when a specific condition is met. It'll take luck, skill, and teamwork to outwit the meddling peasants who can undo your hard work, and the mighty knights and archers trying to drive off Trogdor, and successfully burninate the countryside, the peasants, and the three thatched-roofed cottages on the board.

The game also comes with Stack 'Em to the Heavens, a mini-game based around stacking the peasant and knight meeples.