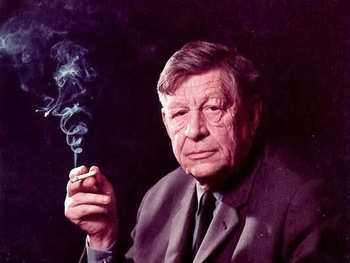 'Oh stand, stand at the window,'
As the tears scald and start;
You shall love your crooked neighbor
With your crooked heart. '
—"As I Walked Out One Evening"
Advertisement:

Had a huge influence in the tone and structure of modern poetry, and on the poets surrounding him during his time. In turn, he was influenced by T. S. Eliot, Marianne Moore, Dante, and W. B. Yeats.