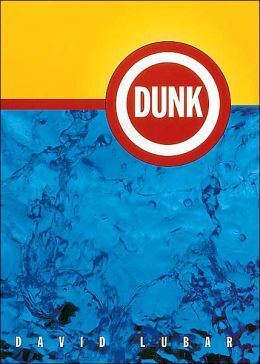 "I wanted to make the marks dance like puppets on a string. I wanted to shout and scream at the world from the safety of a cage. I wanted to be the Bozo."
Advertisement:

Dunk is a 2002 novel written by David Lubar.

Chad is your average teen living with his caring mother Annie and athletic Best Friend Jason at the Jersey shore. His summer break is starting out mostly the same way, until he finds something scattered amongst the games: A wisecracking bozo who roasts anyone so that they can dunk him. He idols this bozo and wants to be one himself. Until he finds out who the bozo is.

And this is only the first part. During this summer, he's framed, reminded of his terrible dad, and much more. All of this makes him realize that laughter is much more than a reaction.

Life wasn't a passing mark you had to hook or lose forever.