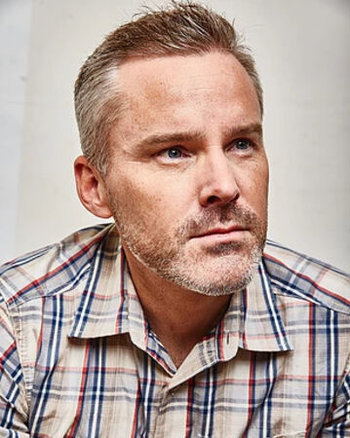 We're talking about this Roger.

No copyright law in the universe is going to stop me!

Roger Craig Smith (born August 11, 1975 in St. Joseph, Michigan) is an American voice actor who's notable for his extremely versatile range. He can go from downright wacky and high-pitched to serious characters, even to Badass Baritone/Evil Sounds Deep territory.

He is currently best known for Ezio Auditore in the Assassin's Creed series while set in Italy, Batman in Batman: Arkham Origins, Captain America in Marvel's animation lineup on Disney XD, Thomas in Regular Show, the titular role of Sonic the Hedgehog from 2010 onwards, and Chris Redfield of the Resident Evil franchise from 5 onwards.

and seems to be a big fan of space and photography.

Sonic backs up a bit too far from his "happier place".

Sonic backs up a bit too far from his "happier place".