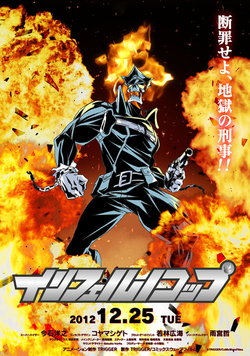 He's the purgatorial flame of this shithole...He is Inferno Cop!
"Justice has grown weak, the corrupt dwells in the streets of Jack Knife Edge Town... The weak scream helplessly yet again..."
— Opening Narration
Advertisement:

This should tell you something.

The premise is as thus: Inferno Cop, a messenger of justice, came back from hell to avenge his family's death by the hand of the nefarious organization called Southern Cross and to protect innocent citizens from those who dwell in the darkness. But in the dark shadows of the skyscrapers of Jack Knife Edge Town, everyone is out for his head...

...yes, even newborn babies, a Superhero Judge in tights, zombies, the FBI and a Mecha clone of himself. Mix this plot with a hefty dose of Affectionate Parody of every anime ever, very Limited Animation:note This is done to maximize profits so the money can be spent on projects like Little Witch Academia and Kill la Kill, which cost a lot more than this and crude jokes and you got Inferno Cop. Basically, Axe Cop as an anime.

A sequel was announced in 2017, with Over Justice taking on a major role. However, nothing had come out of it since it's announcement and is likely stuck in Development Hell. Compare Axe Cop and Kung Fury.

...which roughly translates to "Inferno Glass! Police... from Hell!" Why would one read the first part as "Inferno Glass" can be up for debate, there has been a Twitter convo

regarding this between a watcher and... Inferno Cop (actually the official Twitter account for the show). Inferno Cop's response? "Be it 'cop' or 'cup,' both seems the same to me." One might also speculate the lyrics is referring to a book title.