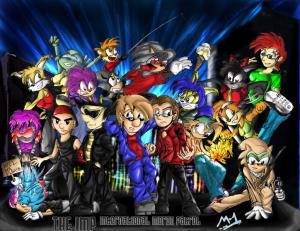 "Ah, the Moron Patrol's mansion, where our heroes live! A place full of bravery, strength, justice, and- ACK! Who has put shit on my bed, damn it?!"
—The Narrator

about the life of a superhero team in a town called Itty City. The protagonists, despite their occupation as superheroes, mostly consist of various types of anti heroes who are either too lazy, stupid, apathetic, cowardly and/or selfish to do their job of protecting the town, or at least do it properly.

The series is notorious for its rampant Non Sequitur humor and endless cast, original or not. Numerous spinoffs have been made by varying authors. Despite this, only two of them (IMP XS, starring a new team that takes place 5 years after the original, and VVV, starring IMP villain Romzy as he forms a new villain team) are considered canonical, though all of them have been unofficially canceled. Before their cancellation, though, two of the spinoffs had a Christmas Crossover with the original series. Episodes are released whenever the author is not busy with making video game parodies/college and work/animating Evil Doc cartoons/having a life, etc.