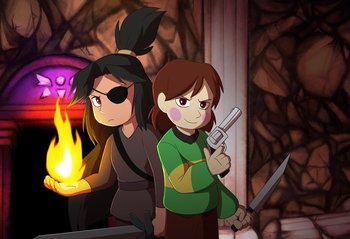 "Let's mess someone up."
"A common interest will unite them... an unholy alliance many would say. But I beg to differ, as an unlikely camaraderie develops a different outlook on certain things is possible. But make no mistake, this isn't going to be a pacifist run. Fighting is still in their nature, and they can both be as violent as ever to anyone who stands in their way. But... Well, you just have to wait to see for yourself."
— Core!Frisk, Interlopers Introduction

Interlopers or Interlopers: The Chronicles of Chara & Buddy is a fanmade Crossover Spin-Off of Undertale and LISA, created and directed by Strelok

, in collaboration with various other well-known fan-artists, such as TC-96

, the creator of Endertale and animator Absolute Dream

The series started on June 1st, 2018 with the video Chara vs Buddy

in which the titular characters duke it out for a while, before a mysterious being known only as "Kiwi-Frisk" interrupts the fight by easily defeating both of them.

Utterly humiliated, Chara and Buddy decide to put their differences aside to pursue, find and take their revenge on Kiwi. Their journey leads them across the multiverse. And along the way they might be forced to undergo a much-needed introspection on themselves and their goals.

What our "heroes" don't know: Their entire adventure has been foretold and orchestrated by The Man Who Speaks In Hands and a mysterious child named CORE Frisk, who will watch it with interest.

The series is comprised of several animated shorts and episodes, each showcasing either a battle or the point of view of a character on certain events. A comic

hosted on TC-96's Deviantart page details what happens between the videos.