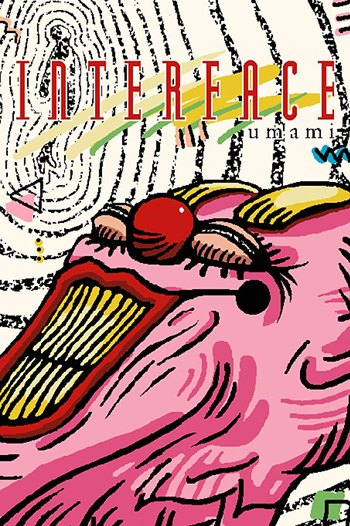 The year was 1943...
"I've been having visions again, one of a machine, that process the world in ones and zeros. I fear camouflage has no effect on those who see the world in black and white."
— The Chef in Episode 09, "Camouflage"

Interface is a Surreal Horror web series created by Canadian YouTuber and animator u m a m i, whose real name is Justin Tomchuk. Umami is most known for his Thomas the Thermonuclear Bomb

video, although Interface is his most celebrated series. In 29 October 2018, [adult swim] released two short animations made by Umami called "Open Wide Up"

The series, for the most part, follows two characters: "Blue Guy" , whose real name is Henryk Niebieski, a sharply-dressed middle aged Silent Protagonist, and Mischief, a pink serpentine creature with gigantic teeth and a clown nose that can transform itself into other forms. The plot vaguely follows both characters interacting with eachother as they explore a surreal Montréal. Intertwined with their story is that of KAMI, an absurdly powerful android powered by the mysterious "Cerebral Electricity" and created by Greetings Robotics Corporation as a mean to harvest the Cerebral Electricity from ghosts and spirits, and her creator "Mr. Greetings", the CEO of Greetings Robotics who seeks control the Cerebral Electricity, although he doesn't know if his cause is truly righteous.

The plot is slow-paced and initially hard to follow, as most of the episodes carry a very surreal, psychedelic, almost dreamlike tone, with its bold and distinctive art style and strong sound design. However, Interface's episodes can be quite varied, frequently employing the Rule of Symbolism to expand on its themes and plot.

Interface can be found on Umami's youtube channel here