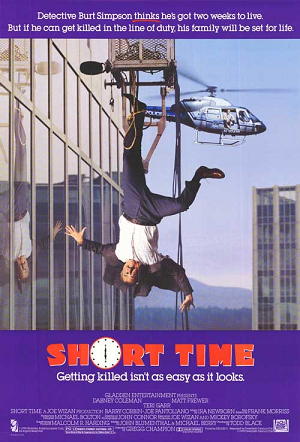 Life's too short, so here's the end of the movie.
Advertisement:

Getting killed isn't as easy as it looks.

Burt Simpson (Coleman) is an extremely risk conscious cop whose constant worrying about the future makes him unable to enjoy the present, which has strained his relationship with his wife and young son. That changes drastically when he goes to a routine check-up and a bus driver secretly swaps Burt's results with his own in order to hide his recent use of marijuana. Unfortunately, said bus driver turns out to suffer from a terminal illness and thus Burt is told he only has two weeks to live. While Burt is obviously upset, his main concern is his son, since Burt's dream is that he one day attends Harvard and he finds that his regular life insurance will only pay a rather small amount. His police officer's insurance is much higher though...

...unfortunately, said insurance only covers "professional damage" i.e. dying in the line of duty. Oh, and did we mention Burt only has a few days left until retirement? Hilarity Ensues as Burt becomes a reckless supercop, much to the confusion of those around him, especially his partner Ernie (Frewer).