Web Animation / So This Is Basically... 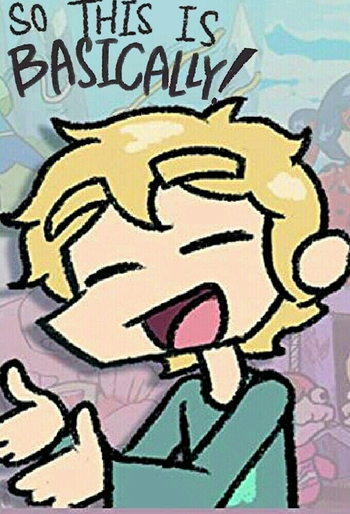 So This Is Basically... was a Web Animation series created by JelloApocalypse (real name Brendan Blaber), best known for his Welcome to... series. In fact, So This is Basically was a Spiritual Successor to that series, but instead of summarizing websites, Jello explained pieces of media, mainly Western Animation, Anime, and Video Games. It was his dominant series after the final installment of Welcome to.

Each episode featured Jello as a narrator talking about the work in question, with his own illustrations displayed instead of screenshots from the work (episodes after the first few were drawn by other artists in Jello's style, though Jello still did storyboarding). Most of the humor is carried over from Welcome to; expect lots of lampshading and lighthearted (and some not so lighthearted) jabs at the work's problems, even if he has no clue what he is talking about.

With the release of So This Is Basically Genshin Impact in May 2022, Jello sadly confirmed that he's not currently planning on making more episodes due to an increased focus on other projects, such as his voice acting career, various gaming highlight videos, and the Epithet Erased novels.

The episodes can be found here

. In order, the series tackled:

While the series was active, contributors to Jello's Patreon

were able to vote for what the next episode of So This is Basically was.