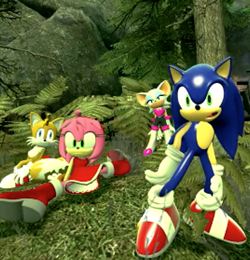 The Sonic Zombie series is a saga of Stylistic Suck videos made in Garry's Mod featuring Sonic the Hedgehog and friends in the midst of a Zombie Apocalypse. They were created by Steve AKA Balena Productions

, who became famous for his Sonic in Jaws video.

The series officially ended on September 16th 2015, with the aptly named "Sonic Zombie The Finale". In June 5th of 2017, Balena released a bonus one-off titled "Sonic Zombie Forces", based on the then-upcoming video game Sonic Forces.

And then the tropes came!: