Western Animation / Pound Puppies and the Legend of Big Paw 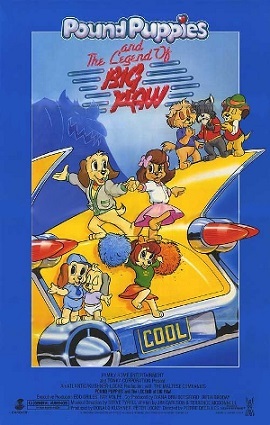 The 1988 Big Damn Movie of the Pound Puppies (1980s) cartoon. Pound Puppies and the Legend of Big Paw was a retooling of the concept and seemed to take place in a different universe to the original show.

The main story took place in the 1950's, told by an adult Whopper as a story for his niece and nephew in the present (or at least the present back when the film was made). In Whopper's tale, the Pound Puppies and their human friends are organizing an adoption bazaar, only taking time out to admire the Bone of Scone: a mysterious bone that bestows puppy power and lets dogs and humans communicate.

However, a mysterious man named McNasty turns up to adopt some puppies a day early and also seems to have some plans of his own for the strange artifact...

The Legend of Big Paw contains examples of the following tropes: