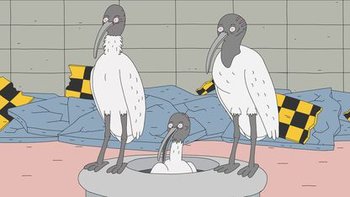 , a bird often called the "bin chicken" after its habit of foraging in garbage bins. The birds—named Derek, Janice, and Clive— offer wry commentary on Australian popular culture and urban life. It is notable for being one of the very few adult animated series ever produced in Australia, and it wears its uniquely Australian charm with pride. Set in Darling Harbor, Sydney, the series cheerfully pokes fun at all manner of topics.