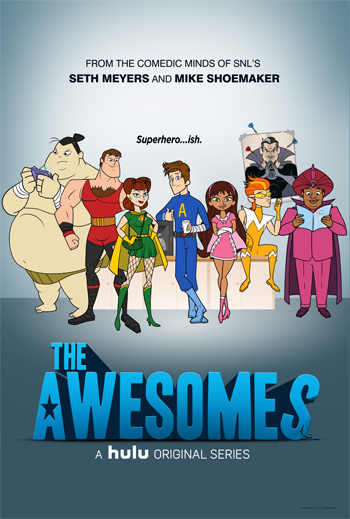 The Awesomes, our bar is lower.
Advertisement:

The Awesomes is an adult animated series streaming on Hulu, about the greatest superhero team ever — after all the good members quit. From the comedic minds of Seth Meyers (Saturday Night Live) and Mike Shoemaker (Late Night with Jimmy Fallon), and showcasing the voice talents of then-contemporary and past SNL stars, The Awesomes premiered in August 2013.

After Mr. Awesome, the world's most beloved superhero, announces he's retiring, he reluctantly passes the mantle and leadership of the eponymous team off to his son, Jeremy (aka "Prock"). Prock is incredibly intelligent, but he's not cut out for being a hero, being a rather nonathletic wimp with no leadership experience. After all the other members leave, save Prock's only friend on the team, Muscle Man, Prock is forced to build the team back up so that the US Government will continue funding them. After filling out his roster with an eccentric group of superheroes who had been previously rejected for a litany of reasons, Prock and the new Awesomes have to learn to be a good team and prove themselves to the public.

Has been officially cancelled by Hulu after the third season ended, though the creators are allegedly still looking for other networks willing to pick the show up.

The Awesomes provides examples of: