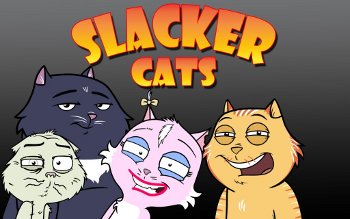 From left to right: Dooper, Buckley, Tabitha and Eddie.
Advertisement:

Slacker Cats is about two Funny Animal cats, Eddie and Buckley, and their strange and humourous adventures - often involving their two stranger "friends" Tabitha and Dooper. Main plots of the show revolve around Buckley and Eddie's schemes to escape the everyday monotony of being house cats by taking advantage of humans (as well as other cats) to freewheel themselves in the fictional city of Wendell, California.

While it was originally advertised as being for children, the themes certainly proved that wrong. The series originally lasted from August to September, 2007, on ABC Family with only six episodes broadcasted. It was revived in 2009, with 6 new episodes, only being shown on the ABC Family website. Resulting in a total of 12 episodes. While the animation style is similar to Family Guy, it was actually animated by Film Roman.