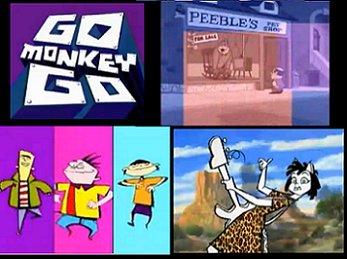 Imagine a channel that showed a bunch of music videos during commercial breaks. These videos featured footage from the shows the network aired, and sometimes even had original animation made for it. And here's the kicker: many songs were done by prominent artists like They Might Be Giants, Will.i.am, and even Devo. Prepare to be surprised, as this was Cartoon Network during the late 1990s/early 2000s.
Advertisement:

As part of the channel's focus on Cartoon Network's "classic" programming, the videos moved to air during commercial breaks on Boomerang in the late 2000s and early 2010s. You can view many of them here

Some (but not all) of the original Cartoon Network Groovies made were...: