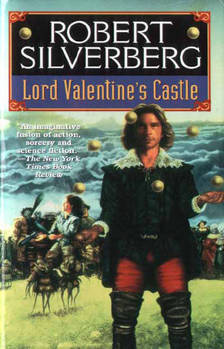 The Majipoor Series is a Planetary Romance Science Fantasy series by Robert Silverberg; probably his most popular and successful work. Starting with the award-winning Lord Valentine's Castle in 1980, the series has grown to include half a dozen novels and several short-story stories.

Majipoor is a very large planet, although its low density and lack of heavy metals means that its gravity is similar to Earth's. It's a remote backwater, but several different species live on the planet, including humans, who constitute the majority of the population, and the shape-shifting native Piurivar. The society is agrarian and feudal, ruled by four people: the Coronal (Lord Valentine in the first novel), who lives in a great castle atop Castle Mount; the Pontifex, who is always the previous Coronal, and who lives deep underground in The Labyrinth; the Lady of the Isle of Sleep, who is always the Coronal's mother, and who sends dreams to the planet's inhabitants; and the King of Dreams, who lives on the remote continent of Suvrael, and who sends nightmares to punish wrongdoers.

In the first book (as the series was written), Lord Valentine, the current Coronal, has lost his memory, and must make his way across the planet on a journey of self-discovery. The next two books, Majipoor Chronicles and Valentine Pontifex also focused on Lord Valentine, but other books in the series, especially the prequels, have simply shared the setting.

A French comic adaptation started in 2009.

Books in the series (in internal chronological order):