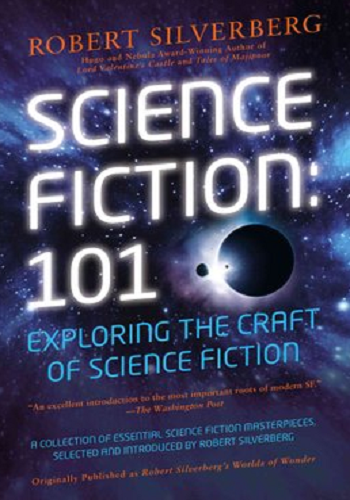 First published in 1987, under the title Robert Silverberg's Worlds of Wonder, by editor Robert Silverberg. In 2001, it was re-released under the title Science-Fiction 101. This Genre Anthology collects multiple Science Fiction short fiction stories by various authors. The purpose of each story, though, is not merely to entertain but actually to teach a principle about writing science fiction. After each story is a short essay on what to learn as a writer by Robert Silverberg. In the introduction, Silverberg explains that reading other authors is how he learned to write, and hopes to present these stories so that other readers may do the same.

open/close all folders
Four in One
Four in One is a short story by Damon Knight. Its protagonist is George Meister, a biologist on an expedition through a new planet with three other individuals: Vivian, a geologist, Major Gumbs, their military guard, and Miss McCarty, a government supervisor. An accident causes them to fall into a strange amoeba-like organism, which promptly engulfs their bodies... but their nervous systems survive. Now in control of this strange creature, the four people attempt to transform themselves in a more useful shape, and pursue their opposing goals.
Fondly Fahrenheit
Fondly Fahrenheit is by Alfred Bester, and it concerns a man and his android. James Vandeleur has been forced to go on the run, because his android has a murderous streak and will sometimes randomly kill people. Too afraid to turn in the android and possibly lose all chance of making a living, Vandeleur puts them both into hiding, while trying to find out what makes his android go wrong. But maybe it's not just the android that's messed up...
Home Is the Hunter
Home Is the Hunter, by Henry Kuttner, takes place in a dystopian New York, where society has been split into two castes. The Populi are the common folk, who go about their daily lives and stay out of the way of the Head-Hunters, the elite class who battle each other in gladiatorial duels. The story is narrated by the Head-Hunter Honest Roger Bellamy, the mightiest warrior in the city who knows full well he's only as good as his most recent duel.
Advertisement:
The Monsters
The Monsters is a short story by Robert Sheckley. It concerns a village of "humans" who are one day visited by extraterrestrials. However, their differing values quickly create conflicts, and each side begins to view the other as evil monsters.
Common Time
Common Time is by James Blish, and is about the strange things experienced by a pilot testing an experimental faster-than-light drive.
Scanners Live in Vain
See Scanners Live in Vain.
Hothouse
See Hothouse.
The New Prime
The New Prime is by Jack Vance, and concerns the selection of a new ruler of the galaxy.
Colony
Colony is a short story by Philip K. Dick, about a colonization group's arrival to Planet Blue, a seemingly perfect newly-discovered world. Is this Eden-like paradise as perfect as it seems? Of course not!
The Little Black Bag
The Little Black Bag is a short story by CM Kornbluth. In the present, an old physician, Dr. Full, is living on the streets after having been fired in disgrace. One day he awakes to find a mysterious black bag, which is full of medical tools that make surgery a breeze. Unbeknownst to him, the bag comes from the future, where the average human has become stupider and therefore rely on machines to simplify their jobs for them. With the aid of his first customer, a receptionist named Angie who knows the truth about his tool, Dr. Full sets out to become a private doctor gaining much success with his healing... provided these tools keep working.
Light of Other Days
Light of Other Days is a short story by Bob Shaw. It's about a married couple with an unwanted pregnancy, who stop by a house in a beautiful valley selling "slow glass". Slow glass is a substance so thick that light takes years to cross it, allowing it to preserve images in it like a meadow, mountains, or sunshine, and thus, memories.
Day Million
Day Million is by Frederik Pohl, where he tells you (yes, you) a little Boy Meets Girl story. But not quite the story you expect.
The anthology itself