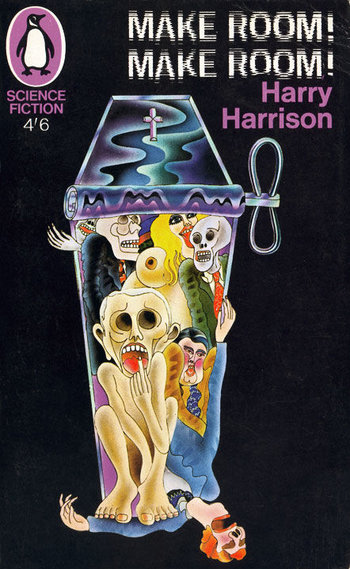 "To TODD and MOIRA
For your sakes, children, I hope this proves to be a work of fiction."
— Dedication to the novel
Advertisement:

It's set in the Crapsack World of New York City in the (then) far-future year of 1999, a world beset by severe overpopulation and environmental collapse, where a bland artificial food called soylent (made from soy and lentils) is the best thing most people ever get to eat.

When a wealthy racketeer named "Big Mike" is killed, NYPD detective Andy Rusch is assigned to investigate the murder — a daunting task, in a city of 35 million inhabitants. Rusch finds himself getting romantically involved with the murdered man's concubine, Shirl. Meanwhile, the killer — a poor immigrant boy named Billy Chung — attempts to elude capture.

It is now best-known as the inspiration for the film Soylent Green. (The famous secret of Soylent Green was invented for the movie, and isn't in the book.)