Literature / The Man from C.A.M.P. 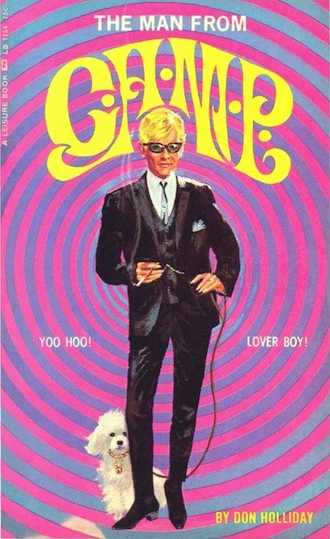 One of the first gay pulp fiction series, an Affectionate Parody of James Bond and The Man from U.N.C.L.E. written by Victor J. Banis under the pseudonym of Don Holliday, shortly before Stonewall.

Jackie Holmes is a swishy, wealthy gay man living in California in the mid-1960s. He is also a vintage car mechanic, an expert on diamonds, an expert marksman, a martial arts master, and a spy. Specifically, he's employed full-time by a clandestine organization known as C.A.M.P., dedicated to the protection and advancement of homosexuals everywhere. With the help of his burly assistant Rich and whatever poor sorry straight INTERPOL stuck him with, Jackie foils thieves and crime rings, flounces around and is generally fabulous, and always manages to seduce his partner in the end.

The C.A.M.P. books are notable mostly for being among the first queer novels published before Stonewall, but they're pretty fun in their own right too, despite being written in a few days each, and some of the prose being kind of rough.

After these being out of print for a very long time, anthology collections are starting to come out—hooray!