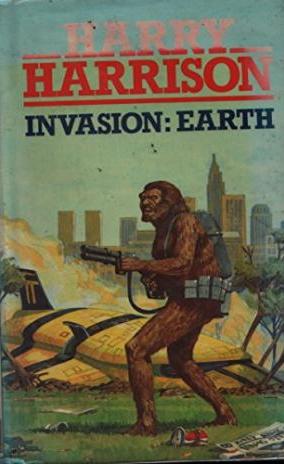 One of the editions, showing a Blettr.
Invasion: Earth is a 1982 science fiction novel by Harry Harrison.
Advertisement:

A UFO crash-lands in the Central Park Zoo. Colonel Robert Hayward of Air Force Intelligence and his team enter the craft and, after killing a hostile ape-like creature, find a slightly more humanoid prisoner, who at first speaks Russian and then English.

The alien, named Hes'bu, reveals that his people, the Oinn, have been listening to broadcasts from Earth and learned the two most commonly-heard languages (the Cold War being still on and all). The Oinn are at war with the Blettr (like the hairy creature that attacked the soldiers), whose fleet is preparing to enter the Solar System and attack Earth. The Oinn offer their help, but they need to set up a base in the Antarctic with weapons capable of fighting off the Blettr. In return, they need tons of radioactive material to power the weapons. Both of Earth's superpowers agree to the Oinn terms, with Rob Haywood being chosen as the American liaison with the aliens, and a linguist named Nadia Adrianova as his Soviet counterpart.

The Battle of Earth begins...

No relation to the British TV series of the same name.

The following tropes are present in the novel: