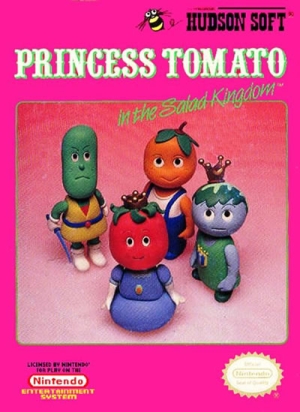 Princess Tomato in the Salad Kingdom is an obscure 1984 Adventure Game by Hudson Soft, originally released for certain Japanese home computers and later ported to the Nintendo Entertainment System and the Famicom. It stars Sir Cucumber, a knight of King Broccoli, whose kingdom has been usurped by the evil Minister Pumpkin and his cruel farmies. The king charges Sir Cucumber to rescue Princess Tomato and regain the turnip emblem, promising her hand as his reward.

Gameplay alternated between a puzzle Point-and-Click interface, a few mazes, and "battle" sequences that are actually games of Rock–Paper–Scissors. Although a few sequences can leave the player stumped, it's impossible to make the game unwinnable and only one round of Rock–Paper–Scissors actually has negative consequences for losing. Obscure, quirky, and a bit short, the game's nothing if not unique.

Despite its obscurity, it was uploaded to the Wii Virtual Console, and Princess Tomato was converted into Bomber form to be playable in Super Bomberman R.