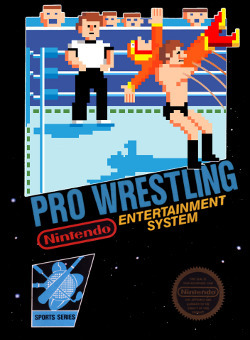 A WINNER IS YOU
Advertisement:

Pro Wrestling is a Wrestling Game released by Nintendo in 1987 for the Nintendo Entertainment System. (It was originally released in Japan for the Famicom Disk System in 1986, as Puroresu: Famicom Wrestling Association.) The developers of this game went on as Human Entertainment to create the Fire Pro Wrestling series.

Not to be confused with the Sega Master System game of the same title and released the same year, which was a masculinized version of the AJW-inspired Sega Arcade Game Body Slam. Or wrestling in general, for that matter.

This game contains examples of:.