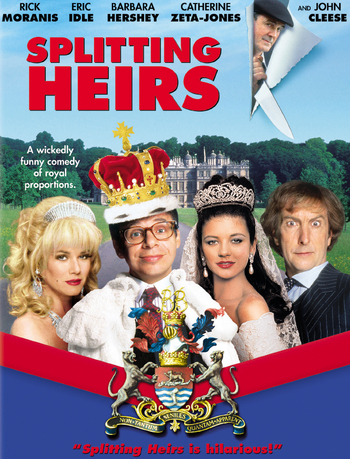 Splitting Heirs is a 1993 British comedy film written by Eric Idle of Monty Python fame and directed by Robert Young.

Tommy Patel (Eric Idle) is an average man living in West London with a Hindi family. An American by the name of Henry Martin (Rick Moranis) visits from New York and he and Tommy have a night on the town, leading to them becoming good friends, with Tommy soon discovering Henry is actually a noble, the heir to the Duchy of Bournemouth.

Tommy soon learns from his mother that he was adopted after accidentally being left behind in a restaurant as a baby, and begins to suspect that he's the rightful Duke. Tommy begins to search for evidence to prove his birthright, he meets several odd characters such as his promiscuous birth mother Lucinda (Barbara Hershey), Henry's beautiful fiancée, Kitty (Catherine Zeta-Jones) and the comically evil lawyer Raoul P. Shadgrind (John Cleese), causing hilarity to ensue in the process!