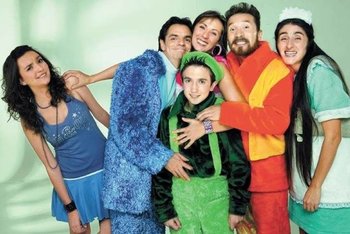 La familia P. Luche (also known as La familia Peluche) is a Mexican television comedy series, created by Eugenio Derbez and produced by Televisa, ran for 10 years from 2002 to 2012. It's a sequel of sorts of Derbez's sketch show Derbez en cuando and XHDRBZ; it was originally one of the sketches on the show, but due to its big popularity, it was given its own space as a weekly series; it aired as a section of XHDRBZ from 2002 to 2004, while the seasons produced and aired in 2007 and 2012 were made independently. The series was written, directed and produced by Eugenio Derbez.

The show is about the daily life of a dysfunctional family and whose plot is set on a fictional city named Ciudad Peluche, where ridiculous and comical situations are common.