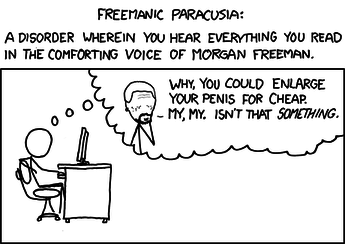 It's amazing what it does for YouTube comments.
Advertisement:

The tendency when enjoying a story to "read" or "hear" a character's voice depending on the observer's preference. More frequent when a character does not or did not officially have a voice (such as a book), especially until some much later adaptation.

Movies are frequently cited/accused as creating the assumed voice of a character even when there's no objective reason this should occur (e.g., it is simply the actor's normal voice or an actor doing his own interpretation). If the work is frequently adapted, this is usually based on the most popular actor portraying the role. Many writers do in fact "hear" and "see" their characters but generally don't feel the need to enforce this view on the audience except in Broad Strokes.

Interestingly, why one voice is locked into our minds may not be related to how good, official or genuine it is. It might be that the "official" or mainstream interpretation is seen as pretty terrible or disingenuous by the observer. Maybe the audience remembers an obscure adaptation which existed as the sole version until recently as a childhood memory, or maybe there was something merely memorable (or infamous) about said "voice".

Not to be mistaken with Brain Bleach. Also, has nothing to do with Mondegreen Gags or Ear Worms.