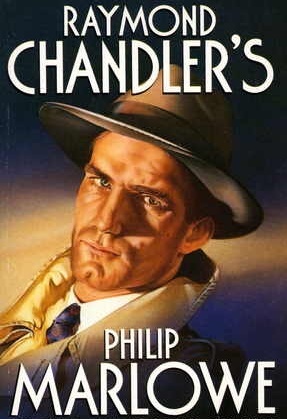 I'm a licensed private investigator and have been for quite a while. I'm a lone wolf, unmarried, getting middle-aged, and not rich. I've been in jail more than once and I don't do divorce business. I like liquor and women and chess and a few other things. The cops don't like me too well, but I know a couple I get along with. I'm a native son, born in Santa Rosa, both parents dead, no brothers or sisters, and when I get knocked off in a dark alley sometime, if it happens, as it could to anyone in my business, and to plenty of people in any business or no business at all these days, nobody will feel that the bottom has dropped out of his or her life.
— The Long Goodbye
Advertisement:

The Philip Marlowe series is the creation of Raymond Chandler, and an original Trope Codifier of the Hardboiled Private Detective archetype. While Marlowe's first official appearance was in the 1939 novel The Big Sleep, Chandler later adapted some of his short stories about similar detectives into longer novels.

In a World… of dirty cops, femme fatales, and a whole lot of murder, he faces the seamy underbelly of Los Angeles with nothing but a gun and his wits — and they're both pretty quick.

When he's not snarking or smoking, he enjoys a good game of chess or even some nice poetry.

Several of Chandler's earlier short stories featuring proto-Marlowe characters were subsequently reprinted as Marlowe cases. Chandler wrote one original Chandler short story, which was published under various titles but is most often reprinted as "The Pencil".note Other titles include "Marlowe Takes On the Syndicate", "Philip Marlowe's Last Case", and "Wrong Pidgeon".

Besides Chandler's works, Marlowe appeared in five novels - El Diez Por Ciento de Vida by Hiber Conteris, (translated as Ten Percent of Life), Poodle Springs (unfinished, completed by Robert B. Parker), Perchance To Dream (an original sequel to The Big Sleep, also by Parker), The Black-Eyed Blonde, by John Banville (under his crime-writer alias of "Benjamin Black"), and Only To Sleep, by Lawrence Osborne. There was also a 1988 short story collection to celebrate the centenary of Chandler's birth, by a variety of well-known crime and hardboiled writers.

Marlowe has appeared in no less than 10 film adaptions, even more television and radio programs (including Philip Marlowe, Private Eye, a limited series that aired on HBO from 1983-86 with Powers Boothe in the title role), and at least one video game.

Works about Philip Marlowe with their own pages: