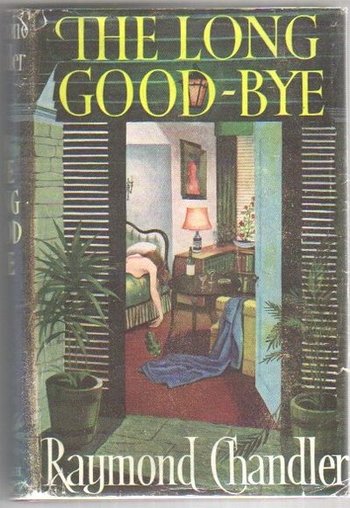 [I am] a romantic, Bernie. I hear voices crying in the night and I go see what's the matter. You don't make a dime that way. You got sense, you shut your windows and turn up more sound on the TV set. Or you shove down on the gas and get far away from there.
Advertisement:

The Long Goodbye is a 1953 detective novel by Raymond Chandler, his sixth featuring the private detective Philip Marlowe.

Marlowe's drinking buddy Terry Lennox flees to Mexico, leaving behind a dead wife and a lot of questions. Marlowe attempts to answer the questions, even though nobody wants him to and despite news coming from Mexico that anything he finds will be too late to help Terry, who has committed suicide. He also takes on a case involving Roger Wade, a bestselling novelist with a drinking problem. Only at the end of the novel is Marlowe finally able to say a proper goodbye to the friend he's lost.

In 1954, the novel was adapted as an episode of the Genre Anthology series Climax!; Marlowe was played by Dick Powell, who had played Marlowe before in the film Murder, My Sweet. A film adaptation, also called The Long Goodbye,note (not a given in the history of Marlowe adaptations) was released in 1973.

The first time I laid eyes on Terry Lennox he was drunk in a Rolls-Royce Silver Wraith outside the terrace of The Dancers. The parking lot attendant had brought the car out and he was still holding the door open because Terry Lennox's left foot was still dangling outside, as if he had forgotten he had one. He had a young-looking face but his hair was bone white. You could tell by his eyes that he was plastered to the hairline, but otherwise he looked like any other nice young guy in a dinner jacket who had been spending too much money in a joint that exists for that purpose and for no other.

He turned and walked across the floor and out. I watched the door close. I listened to his steps going away down the imitation marble corridor. After a while they got faint, then they got silent. I kept on listening anyway. What for? Did I want him to stop suddenly and turn and come back and talk me out of the way I felt? Well, he didn't. That was the last I saw of him.
I never saw any of them again-except the cops. No way has yet been invented to say goodbye to them.