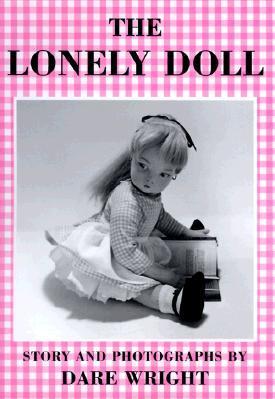 "Once there was a little doll. Her name was Edith. She lived in a nice house and had everything she needed except someone to play with..."
Advertisement:

The Lonely Doll is the first of a series of picture books created by writer/photographer Dare Wright and published between 1957 and 1981. The series follows the adventures of Edith, the titular Lonely Doll, who lives by herself in what appears to be a well-appointed human-sized highrise apartment. In spite of her luxurious surroundings, Edith longs for a friend and is overwhelmed with gratitude when two anthropomorphic teddy bears—mischievous Little Bear and his stern papa Mr. Bear—come to live with her. Edith ended up going on many adventures with Little Bear over the course of ten slim books.

The stories themselves are told with minimal text and evocative black-and-white photos of Edith, the author's real childhood doll, carefully posed to give the impression of a doll come to life as she interacts with a world made for humans. The books have gained a reputation over the years for being more sinister than they seem on the surface, as the climax of many of Edith's adventures is her anxiety over whether she will again be abandoned after angering Mr. Bear, or if she will find herself lost forever, unable to return home. The black-and-white photography (plus the ever-so-slightly Creepy Doll) only contributes to the eeriness.

Edith's appearance was deliberately modeled on that of her author, Dare Wright, with a high blonde ponytail, side-glancing blue eyes, and trademark gold hoop earrings. It's suspected a great deal of Edith's adventures (and her anxieties) are likewise a reflection of the life of her glamorous, multi-talented, but troubled creator. A major motion picture of the life of Dare Wright, The Secret Life of the Lonely Doll (based on the biography of the same name), is currently in pre-production and is slated to star Naomi Watts as Wright and Jessica Lange as her mother Edith.

The Lonely Doll series contains examples of the following tropes: