Literature / A Long Way from Chicago 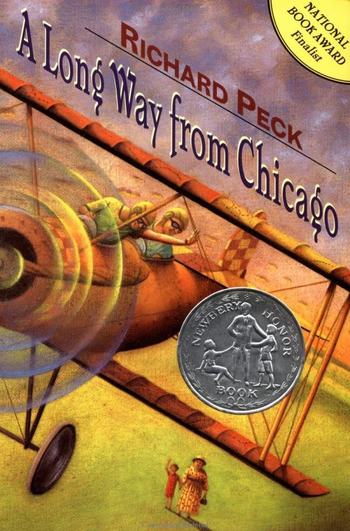 A Long Way from Chicago is a series of short stories by Richard Peck. Set between the 1920s to 1940s, two children - Joey and Mary Alice - find themselves uprooted every summer from their city-slicker lives in Chicago, in order to live with their eccentric Grandma Dowdel in rural Illinois. While the two are initially not very happy with this arrangement, each summer has some wacky adventure happen, usually instigated by their grandmother. It won the 2001 Newbery Award for children's literature.
Advertisement:

In the sequel, A Year Down Yonder, Mary Alice is sent to live with her grandmother for a full year, due to the Great Depression hitting her family hard. Now a teenager, she must learn to survive in a hick town where life is much different than where she grew up. It won the Newbery Medal in 2001

A third book, A Season of Gifts, tells the story of a new family who moves in next door to Grandma Dowdel. The protagonist is Bob Barnhart, whose father is the new preacher in town.