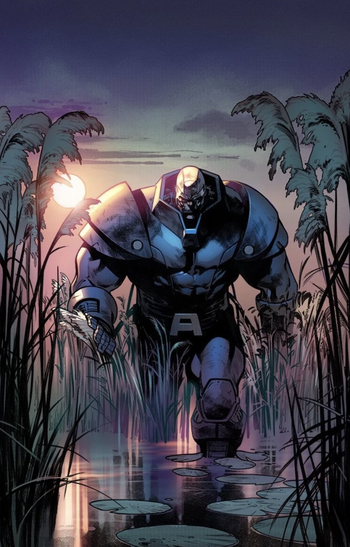 "Peace does nothing to test — to INCREASE — mutants' strength. To force them to evolve into the strong."

"I am the rocks of the eternal shore. Crash against me and be broken!"

Born 5,000 years ago into a desert tribe in Ancient Egypt who took one look at the blue skinned mutant and left the supposed abomination behind to die, the infant who would become Apocalypse was found by the leader of a band of desert raiders called Baal, who adopted the boy and named him "En Sabah Nur" — "The First One", as he believed that the child was the first of a Master Race of beings who would one day inherit the Earth.note He was not actually the "first" mutant, as there were others who came before him — Selene, notably, is over thrice as old as him at over 17,000 years old. Baal raised En Sabah Nur and indoctrinated him into the brutal philosophy of his raiding band — Survival of the Fittest, and the idea that life is and should be a never ending struggle of the strong against the weak and each other to earn the right to live and prosper.

Apocalypse is one of the X-Men's most powerful and dangerous recurring foes. There is more than one Bad Future and Alternate Universe where he rules the world, and all of them are hellish Death Worlds built on billions of corpses where people have to fight and kill each other to earn the right to live. Unsurprisingly, even without all that, Apocalypse has earned the hatred of a number of prominent characters for his millennia of atrocities, genocide and evil schemes.

Apocalypse has featured in various adaptations of the X-Men as an Arc Villain, including the 1990s X-Men: The Animated Series and X-Men: Evolution cartoons. He is the Big Bad of the 2016 movie X-Men: Apocalypse, making his live-action debut, played by Oscar Isaac.