"I either play an oaf or a thug. That's been my career." 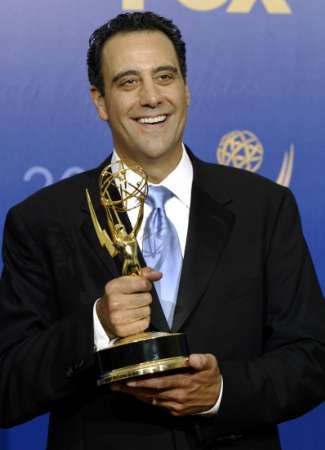 Though probably best known for playing Robert Barone in Everybody Loves Raymond and Eddie Stark in 'Til Death, the 6'9" (206 cm) Brad Garrett (born Brad H. Gerstenfeld on April 14, 1960, in Los Angeles, California) broke into television as a voice actor.

Noted for his Badass Baritone, he voiced Trypticon in The Transformers and also provided the animated voice of Hulk Hogan in Hulk Hogan's Rock 'n' Wrestling.

His most famous voice work was probably his roles for Pixar as Dim in A Bug's Life, Bloat in Finding Nemo, and Gusteau in Ratatouille, as well as Chug in the Disneytoon Studios film Planes. He was also the singing Hook Hand Thug in Tangled.

He also did turns in the DCAU as Bibbo Bibbowski and Lobo (which he reprised for Justice League) in Superman: The Animated Series. He also played Greasepit in Biker Mice from Mars, Fufu Gauche in The Twisted Tales of Felix the Cat, Torque in Buzz Lightyear of Star Command, Grin in Mighty Ducks: The Animated Series, Phil (the Frankenstein Monster) in Toonsylvania, The Big Dog in 2 Stupid Dogs, Jellyroll the talking elephant on ABC's One Saturday Morning, Wizard Whitebeard in the Where's Waldo animated show, Obelix in the* sadly unreleased in the U.S. English dub of Asterix and the Vikings, and Eeyore in a couple of the Winnie the Pooh CD-ROM games (including Disney's Animated Storybook: Winnie the Pooh and the Honey Tree) as well as in the 2018 film Christopher Robin.

On the live-action side of things, Garrett has, in addition to the aforementioned Raymond and Til Death roles, made appearances in Fargo and I'm Dying Up Here and received an Emmy nomination for his performance as Jackie Gleason in the TV movie Gleason. He has also appeared in the feature films Suicide Kings, Sweet and Lowdown, and The Pacifier.