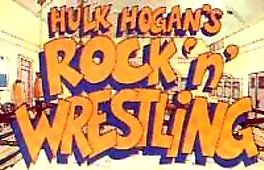 In other words, it followed every other children show plot at the time.

Because of how long it takes to animate a cartoon, let alone 26 episodes, the show was often behind the times and ended in 1986. It's also worth pointing out that none of the wrestlers played their animated counterparts. Instead, the show featured well-known voice actors of that particular time (for instance, a young Brad Garrett voiced Hulk Hogan), not counting that Mean Gene Okerlund and many of the aforementioned wrestlers themselves appeared in the live action skits.