Western Animation / Challenge of the GoBots 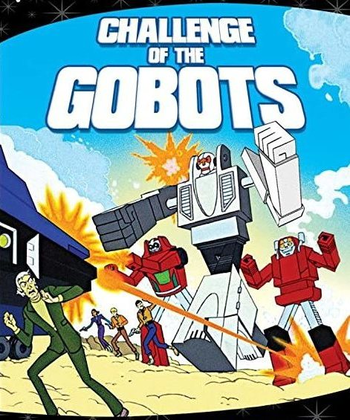 In 1983, Tonka acquired the North American license for Bandai's Machine Robo line of toys, perhaps as a response to its chief rival Hasbro's acquisition of Takara's Diaclone and Microchange figures. Catching wind of Hasbro's Stateside release of Diaclone and Microchange toys, Tonka hastily commissioned Hanna-Barbera to create an animated series, anticipating Hasbro's own Transformers media blitz. Thus was born... Challenge of the GoBots.

The series deals with two opposing forces of transforming robots from the planet Gobotron: the heroic Guardians and the evil Renegades. The Guardians are led by Leader-1, accompanied by Turbo and Scooter. The Renegades are led by the evil Cy-Kill, with Crasher and Cop-Tur among their ranks. The characters rarely have guns, instead shooting energy blasts out of their fists.

Despite the tagline of "Mighty Robots, Mighty Vehicles", the GoBots are in fact Cyborgs — alien humanoids who transferred their brains into robot bodies after their civil war had ruined their planet's biosphere. The Guardians then began converting the otherwise-dead world into a completely metal-sheathed City Planet, breaking up entire uninhabited worldlets for the necessary materials. At the time of the series, this massive construction effort is still ongoing, accounting for the metal world's peculiar "apple-core" shape. The GoBots' origin as organic beings accounts for the presence of genders among the characters — in fact, GoBots stands out among 80's cartoons for having a diverse cast: not only does it include more female characters than the original Transformers, it also includes a woman of colour as a major protagonist!

The series generally focuses on the "lead" three robots from each faction (Leader-1, Turbo and Scooter vs. Cy-Kill, Cop-Tur and Crasher), who are virtually ever-present. Other characters rotate in "guest-star" roles. GoBots have no clear divide between the two factions. The characters, as well as the toys, have no identifying insignias or markings to indicate their allegiance, although it's clearly indicated on the packaging. Likewise, there's no commonality of design within each faction. The only "themes" to a faction are that anything that turns into a monstrous-looking robot or vehicle is a Renegade and their type of voice: the Guardians have booming, echoing voices while the Renegades have a more electronic sound to them.

While Challenge of the GoBots initially held up well against the initial onslaught of Transformers paraphernalia, the line began to flag in 1985. Although the GoBots were cheaper and thus more desirable (at least for parents), the line was outdone by the Transformers, who sported descriptive bios, diverse transformations, and a massive cast. The line limped into 1986 with a hastily-produced feature film, Battle of the Rock Lords, a commercial and critical flop that more or less signalled the end of the GoBots. The line fizzled out soon afterwards.

The GoBots were largely forgotten, even after Hasbro bought Tonka in 1991. By the mid 2000s, the Transformers toyline and ancillary fiction began incorporating a few sly winks to its old competitor. In 2010, it was finally declared that the GoBots were, in fact, actually part

of the ''Transformers'' multiverse, albeit very distant analogues- and that two GoBots were dimension-hopping Transformers (Fun Publications' prose stories for Transformers Timelines had Bug Bite join the Decepticons after gaining a new body that resembled a white version of the Autobot Bumblebee, while supplementary material for Transformers: Animated established that Porter C. Powell's limo was transformed into the Renegade Stretch by an AllSpark fragment before Powell and Isaac Sumdac got rid of him by teleporting him to the GoBots universe).

In 2015, Facebook's Ask Vector Prime feature was temporarily usurped by Renegade Rhetoric, hosted by Cy-Kill himself (and eventually spinning off as its own separate Facebook page). The feature was decidedly tongue-in-cheek, as Cy-Kill was more than happy to take potshots at the Transformers universe. The bulk of the answers described plots for a "season 2" of Challenge of the GoBots, produced in an alternate reality.

In our reality, at least, the GoBots exist in a kind of legal limbo: Hasbro owns the rights to the characters and the premise, allowing them to get away with things such as "Renegade Rhetoric."note The feature was produced by Fun Publications, the former operator of the official Transformers fan club. However, Warner Bros. (via their 1996 merger with Turner Broadcasting, which acquired H-B in 1991) owns the distribution rights to the cartoonnote Which is now available as an MOD DVD release as part of the Warner Archive collection (under the "Hanna-Barbera Classic Collection" name)., and Hasbro's toymaking competitor Bandai maintains control of the original Machine Robo molds. Don't go expecting a major revival any time soon... although 2017 saw Bandai Japan release new Machine Robo toys based on many of the originals (with MRDX-01 Bike Robo even having hand blast accessories and an alternate Cy-Kill face), so things are not completely out of the question.

Despite the legal issues the GoBots did a receive recognition on the Ask Vector Prime Facebook page in the form of the prose crossover story Echoes and Fragments.

There are a few Alternate Continuities for the franchise. A British comic strip called Robo Machines appeared in the periodical Eagle from November of '84 to July of '85, featuring a radically different storyline (the other wiki has information here.)

In France, where the American show had been quite popular, the Japanese Machine Robo series was used as a second season, despite the drastic Art Shift between the series.

Then in 2018, IDW Publishing released a 5-part comics miniseries, GoBots written and drawn by Tom Scioli of Transformers vs. G.I. Joe fame, which ushered in a drastically different new continuity. The series features the characters from the Hanna-Barbera TV series (both humans and Gobots) but significantly reimagined. In this series, Gobots are human-built sentient robots. Designed as Three Laws-Compliant servant robots, a faction led by Cy-Kill has gone renegade and started warring on humanity.

Challenge of the GoBots provides examples of the folllowing tropes: