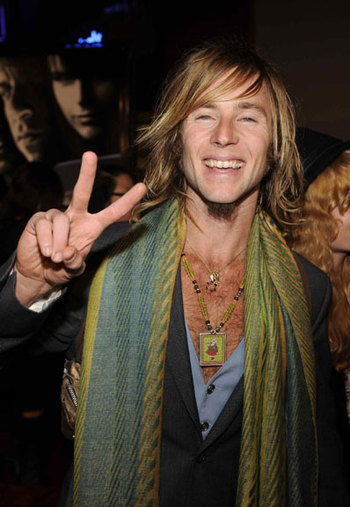 Gregory Michael "Greg" Cipes (born January 4, 1980 in Coral Springs, Florida) burst onto the scene first as the voice of Beast Boy in the animated Teen Titans series. His distinct, slightly raspy voice has been used for a number of characters, mostly slackers or bad boys. He voices grown-up Kevin Levin in Ben 10: Alien Force, Caleb in the animated W.I.T.C.H., Chiro in Super Robot Monkey Team Hyperforce Go!, and Michelangelo in Teenage Mutant Ninja Turtles (2012). For some reason, seems to be paired up with Ashley Johnson a lot.
Advertisement:

A real-life Surfer Dude, Greg was ranked #3 Junior Professional Surfer in the U.S. in 1998, the year he began his career in show biz. He has been vegan since age 8.

He's had tiny roles in John Tucker Must Die and 2009's Fast & Furious where he played a cowboy racecar driver named Dwight. He also appeared in The Onion Movie as the "Hippie Diplomat." note STOP THE VIOLENCE!

Greg is the frontman for the reggae/hip-hop band, Cipes and the People. The song Rescue on the band's 2007 release Conscious Revolution features teenage pop star Jesse Mc Cartney.

Lastly (for now), Greg Cipes and Tara Strong are co-hosts of The Ship-It Show

, a podcast that talks about the fandoms of various shows (with a focus on the romances they root for).