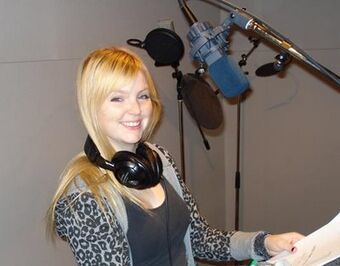 Kristin Fairlie (born April 22, 1985) is a Canadian actress who has appeared in various feature films, TV shows, and animated series. Her most well-known roles are Bridgette from Fresh TV's popular Total Drama franchise and the title character of Nelvana's 1995 beloved Animated Adaptation of Little Bear.

Despite the similar-sounding names, she is not (as far as we know) related to fellow Canadian actor Kyle Fairlie, best known for voicing Rabbit in Franklin and later being part of the Canadian rap rock band Down with Webster. Funny enough, Kyle Fairlie co-starred across from her in The Little Bear Movie.