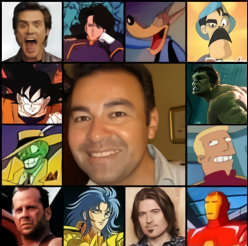 Mario Castañeda (in the middle) and some of his roles.
"¡Yo soy el Super Saiyajin Goku!" Explanation  "I am the Super Saiyan Goku!", said to Freeza after Goku shrugs off his deathly finger beam attack.
Advertisement:

Mario Cuitláhuac Castañeda Partida (born June 29, 1962 in Irapuato, Mexico), better known as Mario Castañeda, is a Mexican actor and voice actor. Most of his roles make good use of the Badass Baritone trope, but he's also capable of using quite the falsetto and of shouting atop of his lungs. His father, Cuauhtémoc Castañeda, was a veteran actor. Although he was born in Irapuato, Castañeda moved to Mexico City with his family when he was one year old. He studied acting at the Andrés Soler Institute from 1979 to 1982 and began his acting career in 1983.

He is best-known in Latin America for voicing teen and adult Goku in the Dragon Ball franchise (a role he took at his son's insistence, as he was a fan of the show), but live-action fans will also recognize him as the semi-official LA-VA for roles played by either Bruce Willis, Jim Carrey or Mark Ruffalo.

He also has quite the Relationship Voice Actor with either René García or Gerardo Reyero.

He was once married to his Wonder Years co-star Rommy Mendoza and had two children, Arturo and Carla, who are also professional voice actors. He later married Susana Melgarejo Franco and had a daughter, Sofía Castañeda, who's also a voice actor. From 2013 to 2014, Castañeda served as creative director of the dubbing studio SDI Media de México after its founder Eduardo Giaccardi left.

As the VA for Bruce Willis:

As the VA for Jim Carrey:

As the VA for John Leguizamo

As the VA for Mark Ruffalo

"¡Que alguien me detenga!" Explanation  "Somebody stop me!"