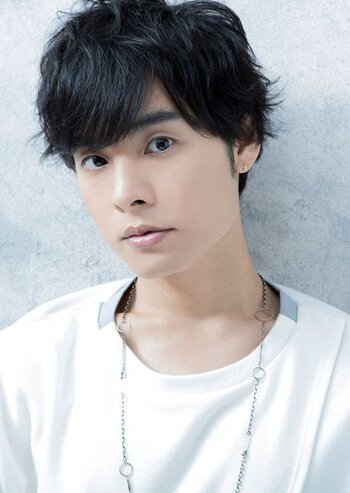 Nobuhiko Okamoto (born October 24, 1986) is a seiyuu from Tokyo best known for his Star-Making Role as Accelerator from A Certain Magical Index, in which he not only won the Best New Actor Award in the Third Seiyuu Awards, he also went on to win the award for Best Supporting Actor in the Fifth Seiyuu Awards.

He's worked with Yuu Kobayashi and Mariya Ise at least twice. Ditto with Ayumi Fujimura, Hiro Shimono and Yōko Hikasa. What's front-and-center, however, is that he seems to have developed a (friendly) rivalry with Atsushi Abe as they've prominently faced-off in at least three series to date. His typecast is usually Hot-Blooded characters, whether good or bad (expect characters voiced by him to give a battle scream at least once), but he can also play The Stoic or The Casanova type roles, as well as The Cutie, depending on the type of series he is in. Also, Keiji Fujiwara seems to be a father figure in some roles.

On March 21, 2020, it was revealed that he is married to fellow voice actor

From here on is a one-way seiyuu! CALL THE DAMN WEBSITE "TV TROPES"! IT'S NOT THAT HARD!"