The main female protagonist. She is a half-elf girl who is one of the candidates to become the next ruler in the royal election. Subaru first meets her when her insignia is stolen by Felt as she needs to possess it to be eligible to participate in the election.

Tropes in the Oboreru IF 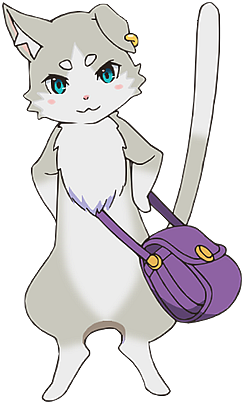 Emilia's mischievous spirit familiar in the form of a cat. He is protective of Emilia, treating her like a daughter. His stated active time is from 9AM to 5PM. 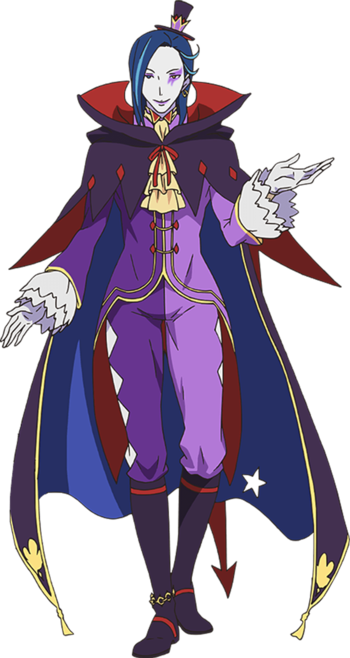 A Mangrave as well as an Imperial Wizard and Count who is a benefactor and sponsor for Emilia's bid for the throne. He is a highly influential individual who is also one of Lugunica's powerful mages. 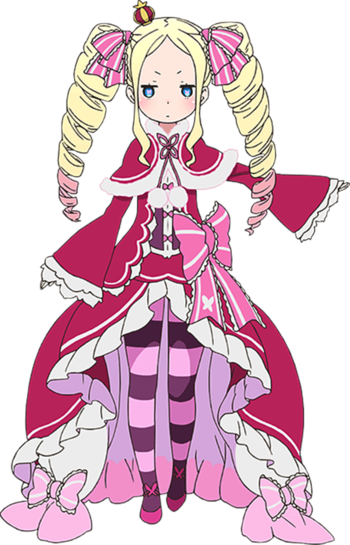 A mysterious mage who guards Roswaal's ancient magical tomes in his enormous library. She has the ability to warp any room in the mansion to this library whenever she chooses.

The twin maids of the Roswaal mansion. They also are Oni, although only Rem still has her horn.

The younger, blue-haired twin sister. She does the cooking, although she is stated to be more generally skilled than her sister in all areas.

She initially suspects Subaru of being a Witch cultist because of the "Witch's Scent" she smells in him, leading to very gruesome results in a few loops. After Subaru earns her trust by saving her life, she falls in love with him and becomes the second girl closest to his heart.

Tropes in the Rem Natsuki IF

The older, pink-haired twin sister. She does the cleaning and laundry for the mansion. Ram is attracted to her master, Roswaal.

A maid working for Roswaal L Mathers and a member of the Emilia Camp. She is Garfiel's half-sister.

A village child who befriends Subaru who planned to become a seamstress in the capital one day.

A merchant and Earth Dragon carriage driver. In several loops, he meets Subaru enroute to Roswaal's territory during his failed attempts to stop Petelgeuse's attack. After Subaru inadvertently saves him from the Witch Cult, he joins Emilia's camp as the Head Internal Affairs Official. Among the 5 candidates, he supports Emilia because he identifies with her struggles to be accepted in society despite being an outcast.

Subaru's female black Land/Ground Dragon which he received as a gift from Crusch. It's of the Diana breed, which are known for their fierce temperament and strong pride. Surprisingly enough, though, she has taken quite liking to Subaru, sometimes in a maternal-like way.

Known as the Shield of the Sanctuary, who guards it from intruders. He's Frederica's fairly uncouth younger half-brother. By calling upon his particular ancestral beastman, he's capable of partially or fully transforming parts of his body into a more beast-like form, which is that of golden tiger, granting him him extreme power and speed. He also has a Divine Protection/Blessing, called "Earth Spirits", which grants him earth-like armor and allows him create powerful earthquakes with a single step, with enough force to collapse a small building in one blow, as long as he physically connected to the earth. Subaru considers him nearly on par with Wilhelm in terms overall strength. 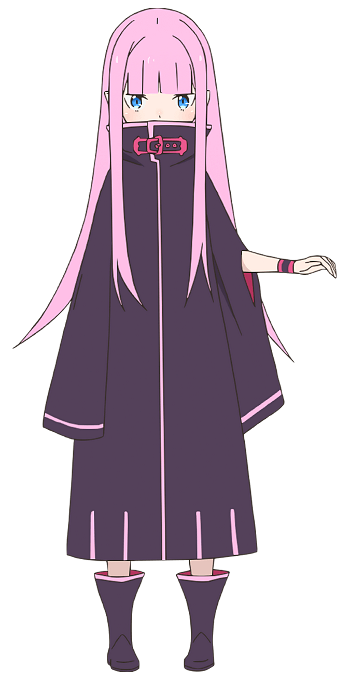 A half-demihuman girl who lived at the Sanctuary centuries ago. She's a longtime friend of Roswaal and Beatrice with a shared connection to the Witch of Greed Echidna.

Centuries ago, the original Ryuzu agreed to let Echidna create clones of her as part of an experiment to research immortality. The clones currently act as the elders of the Sanctuary. Out of all of the clones, only four have an actual personality.