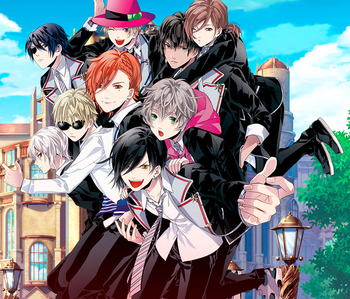 No, it's not an all-boy school, last we checked.
No more being a goody-two-shoes.
Advertisement:

Magical Days the Brats' Parade or MagiDay is a fantasy mobile phone Otome Game developed by Cybird and released in December 2016. It lasted for 2 years before its service was terminated in January 2019.

In a World… where magic is a legitimate school subject and evil forces known as "Vipers" abound since thousands of years ago, the unnamed protagonist receives an admission letter to the pretigious Felix Academy where she then attends with a bunch of good-looking guys and joins the wizards on the battle against evil.

This page provides information on the story, setting as well as mechanics. All tropes pertaining to specific characters go on the character sheets.

These tropes are of a future shone upon by the One Splendor: