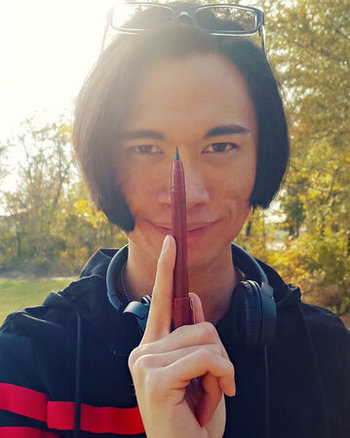 Describe Micah Solusod while I take your soul.
Advertisement:

Micah Solusod (sometimes misspelled Micah Soulsod, born August 21, 1990 in Honolulu, Hawaii) is an anime voice actor working for Funimation. His first major debut role that got him a lot of popularity is his voice work of the title character from Soul Eater.

A really interesting note is that prior to the official dub cast announcement of Soul Eater, Solusod's role as Soul Eater was misattributed to Johnny Yong Bosch by many fans due to the similar vocal range Micah shares with Johnny. * They do share similar vocal ranges, the only difference is Johnny is capable of a higher pitch than Micah. Most of the confusion was started due to the fact FUNimation released a preview clip prior to the dub cast announcement. This confusion has even hilariously lampshaded in his FAQ

where he compared himself to Johnny Yong Bosch where Johnny "is the cool one who knows martial arts" while he's "the skinny one screaming like a little girl while I run away from the guy who knows martial arts." This comparison is made even more hilarious when FUNimation revealed that he will playing the Kazuki Makabe in Fafner In The Azure: Heaven and Earth, which was played in the previous TV series by Johnny Yong Bosch. And just when it seemed like it couldn't get any funnier, he was cast as Ao Fukai in Eureka Seven AO, the son of Johnny's character from the original Eureka Seven. Not to mention that when it gets even more funnier than this, he was cast as Akito Hyuga in Code Geass: Akito the Exiled, which also has Johnny appearing in that same series as Lelouch, but under a very different name.

Micah lived in Hawaii, and he was directly inspired by anime and voice acting growing up. He moved to Texas in 2009 after he was invited to record for some minor roles at FUNimation. He loves drawing in his spare time, and is the lead artist for the webcomic, Ties That Bind. He is in a relationship with fellow FUNimation voice actress Apphia Yu. They got engaged on April 1, 2015, and yes that is not a prank. They both tied the knot

By the way, he's kept himself up to date with what's happening in the Toaruverse after he got casted as Touma Kamijou.

, which he uses quite frequently.