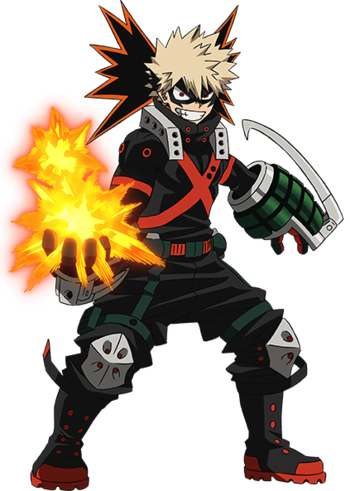 "You'll regret making a fool of me! I'll freaking kill you!"
Click here to see him in uniform

"Can't stand morons like you who can't get to the damned point! Basically you're saying, 'we wanna cause trouble, be our pal!' What a joke! I've always admired All Might's triumphs. No matter what any of you jerks say... Nothing's ever gonna change that!"
Advertisement:
A crude, unfriendly, violent and arrogant boy whose delinquent-like attitude is more fitting of a villain than a hero. His powerful Quirk, "Explosion", which allows him to secrete an explosive substance from his hands and ignite it at will, combined with his prodigious athleticism, has led him to develop a severe superiority complex and relentlessly bully his Quirkless former friend, Izuku Midoriya. He believes that a true hero should be the strongest and always win, which is why he hates being helped by others.
open/close all folders
#-D
E-K
L-R
S-Z
Advertisement: