As a warning, this page will have unmarked spoilers for the latest manga chapters, tread at your own risk. 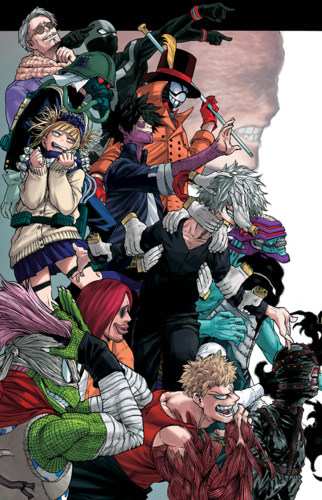 "This clip keeps getting put up and taken down, because both sides get it. Especially this last part... this guy's whole style's gonna spread like a plague. From the punks with a few priors to the really bad guys on the run... anyone who's anyone... myself included, of course. All that evil scattered around out there... we're all gripped by the same fever. We'll all be drawn to the organization he was working with... the League of Villains."
— Giran

A group of villains founded by the infamous All For One and led by Tomura Shigaraki that act as the main antagonists of the series. Initially comprised of nothing more than simple thugs, the group has slowly but surely grown to be one of the biggest threats to society.

open/close all folders
In General
Under All For One
Under Shigaraki
Advertisement:

All For One's Lieutenants

"I am Kurogiri. The one who protects Tomura Shigaraki."

A shadowy member of the League who acted as Shigaraki's guardian. He was captured and imprisoned by Gran Torino during the Internship Arc.

His Quirk is "Warp Gate", and it allows him to create portals out of his shadowy figure. 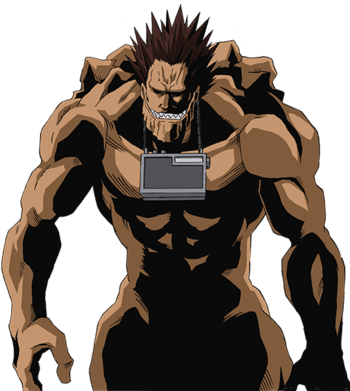 "A king... must inspire dread. Must be admired. Must be strong."

An older member of the League, a gargantuan, Kaiju-like villain who served as All For One's bodyguard. He's known to stalk the mountains out in the countryside and wears a weather radio around his neck. 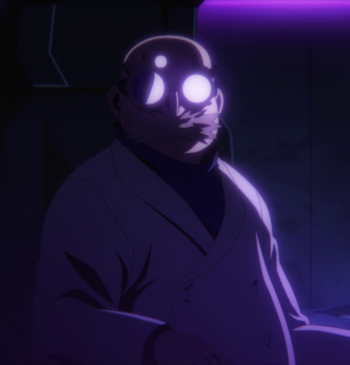 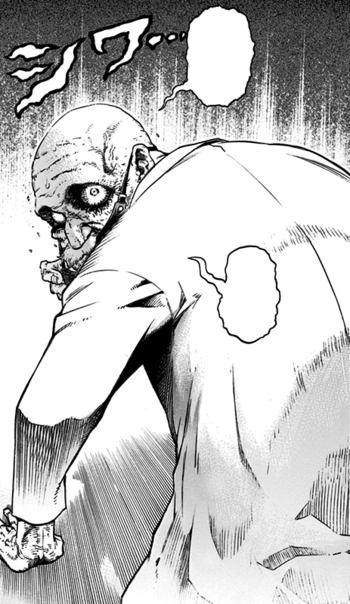 "What a childish daydream! Saying all that with such a straight face was quite impressive!! Very well, Tomura Shigaraki!! I'll help you out, so show me you mean it! Prove to me that you can make your villainous pipe dreams a reality!!"

An older member of the League, a mysterious elderly man who worked as All For One's personal doctor. Publicly, he's the founder of Jaku General Hospital and a philanthropist who has established multiple orphanages and nursing homes. In truth, however, all of that is just a front for his true passion; developing and managing his "children", the Nomu.

While he's listed as being Quirkless publicly, he actually does possess a Quirk of his own, "Life Force", which lengthens his life span at the cost of physical mobility.

Left to right: Muscular, Dabi, Spinner, Toga, Moonfish, Mustard, Magne. Missing: Twice, Mr. Compress and Chainsaw Nomu
"Doesn't matter how many punks with ambition you bring along. That only increases the risks. It's far better to have a small number of experienced elites."

A group of nine villains, ranging from experienced criminals to strong upstarts, who joined the rebranded League of Villains, originally under the belief that the League was affiliated with the incarcerated Hero Killer: Stain. They serve as the League's main taskforce and is lead by Dabi, with a Mid-Tier Nomu that rounds out their numbers to ten. 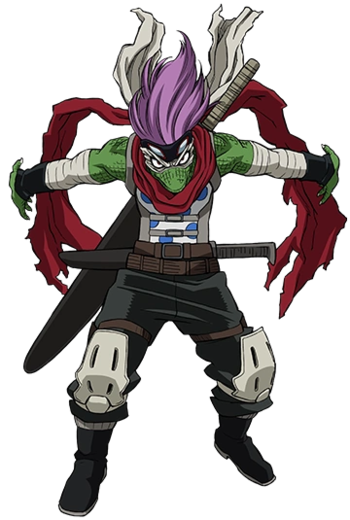 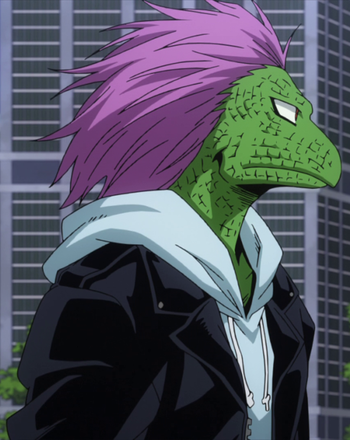 "I've got nothing to love, like Toga does. Nothing I really wanna do. But back then, I just know... Something lit a fire in my heart. All I could think was how I wanted a glimpse of the future he was imagining! Sure... I'm just a nobody who jumped on a bandwagon but what's wrong with that!? Nothing, right!? And you people ain't much better!!! Ain't that right, politician?"

A newer recruit of the League, a young man who was treated poorly back in his hometown due to his reptilian features. After being inspired by Stain's desire to change society, he joined the League with hopes of ending discrimination against those with heteromorphic Quirks.

His Quirk is "Gecko", which allows him to cling to walls and other vertical surfaces, much like a gecko. 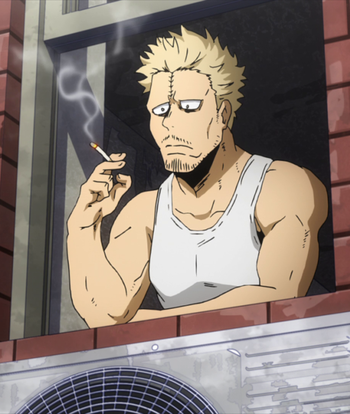 "Hey, Dabi, you hear that message?! Pretty exciting. Mr. Compress sure got the job done quickly, huh? He took his sweet time, though!! I'm getting sleepy over here."

A newer recruit of the League, a fully-costumed man with an odd way of speaking. A rather affable but seriously damaged person, his past is an unpleasant affair: he overindulged in his own Quirk and suffered severe mental trauma as a consequence. Now, he's unable to control his own Quirk outside of his suit and he cannot afford to have his face exposed for too long otherwise he'll begin to split.

The Quirk that caused him such hardships is called "Double", and it allows him to make duplicates of other people and things so long as he has accurate measurements of them.

"We're just a bit fanatical when it comes to our values. All we wish is to show him that there are other ways. Because you kids today... you have your values chosen for you."

A newer recruit of the League, a villain with a double mask and a Stage Magician theme and a stylish way about himself.

His Quirk, "Compress", lets him shrink people and objects which he then stores in marble-like spheres.

"I'm here because I wanna live free! We get to decide where we belong!!"

A newer recruit of the League, a long-haired, sunglasses-wearing transgender woman with some murders and armed robberies under her belt. Her Quirk is "Magnetism". 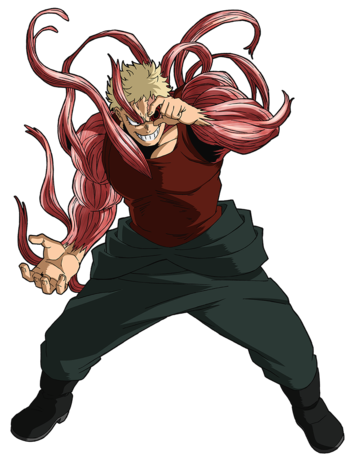 "Brats like you sure know how to pass the blame. It's no good. I don't really hold a grudge against 'em about my eye. I killed 'em, just like I wanted to. And they tried to stop me. We all did our best and had to deal with the results. What's bad is when you can't put your money where your mouth is...like your dear mommy and daddy!"

A newer recruit of the League, a bloodthirsty veteran villain who is responsible for killing Kota's parents. He and Midoriya end up facing off during the Forest Training Camp Arc, resulting in his defeat and capture.

His Quirk is "Pump Up", which allows him to produce muscle fibers to greatly increase his strength and durability. 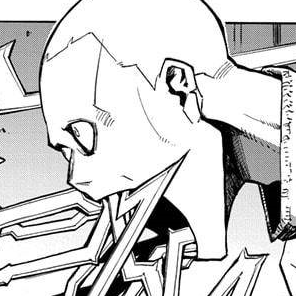 A newer recruit to the League, an escaped death row inmate with a taste for human flesh. He was defeated by an out-of-control Tokoyami and recaptured during the Forest Training Camp Arc.

His Quirk is "Blade-Tooth", which allows him to grow and transform his teeth into long, sharp blades.

"You're getting a top-notch education at a famous school. At least use some strategy. If not... you're barely worth killing."

A newer recruit of the League, a gas mask-wearing boy in a school uniform who was rallied to the League by Stain's association. He was taken down by Tetsutetsu and captured by the police during the Forest Training Camp Arc.

His Quirk, "Gas", allows him to create and manipulate toxic purple gas. Notably, he isn't immune to the gas he creates. 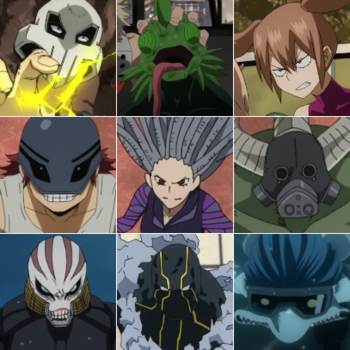 A large group of villains that attacked U.A. with Shigaraki, Kurogiri, and the USJ Nomu during the USJ Arc, with the goal of killing the Symbol of Peace: All Might.

At the end of the arc, they are all arrested and total 72 in number, with most being small-time crooks who are the type to hang out in back alleys.

See here for the Nomus' entries.

"Business dealings... are something y'do face-to-face. And I only make deals with people I respect. Not guys who kick the crap outta me first. Sure, I might know the League. Might not. Either way, you ain't getting a thing outta me. Cuz what kinda merchant sells out his customers?! Thanks, but come again when you got the guts to do this right!"

A broker and affiliate of the League who brings in new recruits and equipment for the organization. His Quirk, "Muddied", allows him to make someone's memories of the next five minutes and the last five minutes fuzzy by touching them.

A vain, flamboyant, and extremely eccentric young man. His Quirk, "Navel Laser", allows him to fire powerful laser beams from his stomach. However, continuous use of this Quirk is liable to give him a stomach ache, and he also needs to wear a special support belt at all times to prevent the laser from "leaking out". Later revealed in chapter 336 to be the The Mole responsible for leaking the location of the training camp to the League of Villains, as well as informing the League about Class 1-A's trip to the USJ.
His tropes can be found here.
The Hero Traitor (Spoilers)

The #2 hero, who was secretly converted into the League of Villains by Dabi... except not really. He's actually a Double Agent trying to infiltrate the League and gain information on them.
His tropes can be found here.
Villain Organization (Spoilers)

The modern-day incarnation of the infamous Meta Liberation Army formerly led by Rikiya Yotsubashi, a.k.a. Re-Destro. The army initially served as the antagonists of their titular arc and tried to destroy the League to sublimate their prestige. However, after his defeat, Yotsubashi willingly surrendered control of the army and its resources to Shigaraki recognizing that his strength and freedom make him the ideal leader to represent Destro's will.
The army's collective tropes can be found here.