Characters / My Hero Academia - Students From Other Classes

"There was no gateway to success here for me, not with this Quirk! Not that someone as blessed as you would ever understand!"

A student from the General Education Department, Shinso is cold, discreet and aloof yet very hard-working. His Quirk is "Brainwash", which allows him to control the minds of anyone who replies to him.

He claims that the students of the Heroics Department are arrogant, though in truth he's jealous of them because he wanted to be a hero himself. Unfortunately for him, his Quirk was useless in U.A.'s entrance exams, making it impossible for him to get into the Hero Department. He was relegated to General Education instead, though he still looked for opportunities to prove he was Hero Department material. His performance at the U.A. Sports Festival eventually gave him the opportunity to apply for transfer into the Hero Course, and after an impressive performance during the Class 1-A and 1-B Joint Training Exercise, his wish was granted; he'll be joining the Hero Course in his second year. 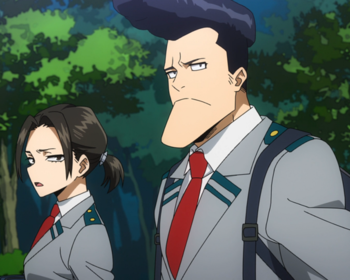 Two General Department upperclassmen that have a severe distaste for Class 1-A.

"Sorry for the sudden explosion!!"

A self-absorbed but brilliant student from the Support Department. She loves making gadgets and relishes the opportunity to show them off. However, she's so obsessed with them that she loses sight of everything else, making a scene at the expense of other people. She allies herself with Midoriya during the Cavalry Battle of the U.A. Sports Festival, and later helps him tinker with his hero costume when he needs to mitigate the damaging effects of One For All. Her Quirk is "Zoom", which gives her telescopic vision. 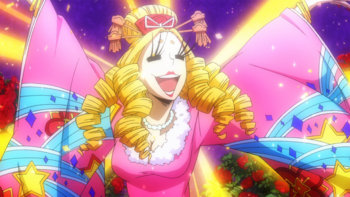 "How dull!! This girl understands nothing, and she'll never measure up to me!! My splendiferous gorgeousness is the pinnacle of beauty! Oooooh oh oh oh oh oh!"

A snooty and stuck-up beauty queen known for an incredibly glamorous appearance and supremely long eyelashes. She consistently wins Miss Con, the top title of the beauty contest U.A. holds during its cultural festival. Because of her access to the Support Department's gadgetry, she goes all-out with her performances. Excessively. Very excessively. 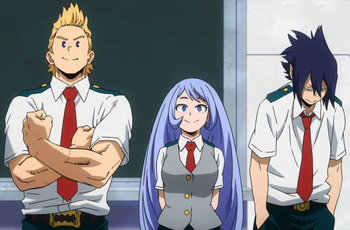 Mirio, Nejire, and Tamaki.
"I see you're all lacking any sort of rationality."
Aizawa, about the trio's incapacity of making a presentation

The trio of third years considered to be the best among U.A. students. They are all very talented students who have been praised as being equal, if not above the level of pro heroes. However, they are also recognized as eccentric people. 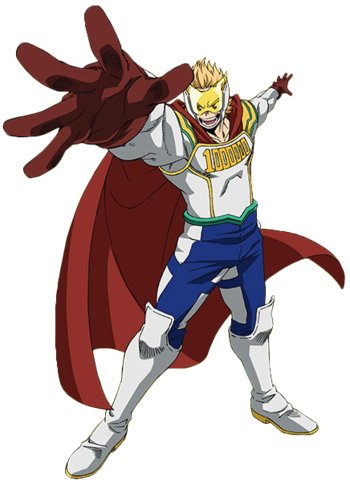 "If there's someone in trouble, or needs help, meddling in their affairs is standard protocol for a hero, isn't it?"

A cocky yet friendly and upbeat Class 3-B student, who, according to Aizawa, is the closest person to becoming the next #1 hero. His Quirk, "Permeation", allows him to phase through solid objects, living beings, sound waves, and even light. 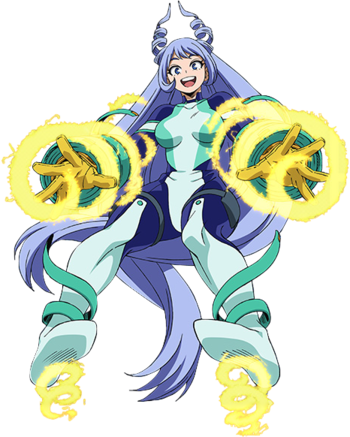 "No matter who I look at, all of you have things that pique my interest! How strange!"

A smiling and welcoming Class 3-A student that has a child-like sense of curiosity. Her Quirk, "Wave Motion", enables her to release her vitality as energy shockwaves, though they lack speed due to coming out in spirals. 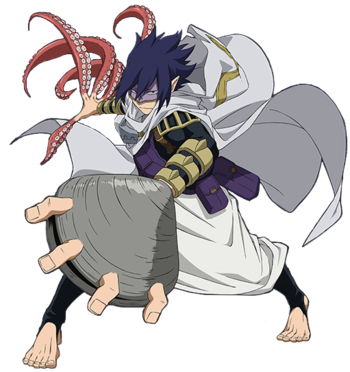 A socially-awkward and painfully shy dark-haired Class 3-A student who is one of Mirio's childhood friends. His Quirk is "Manifest", which allows him to transform parts of his body into the body parts of things that he eats. 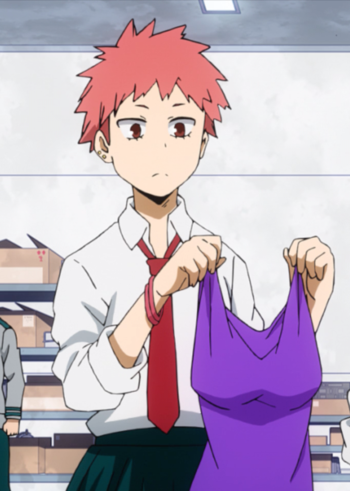 "Nejire is more of a cute type than a sexy type!"

Nejire's best friend, a third-year student from an unknown department.

A second-year student in the hero course. She was part of the class that Aizawa expelled and re-rolled in order to Scare 'Em Straight.